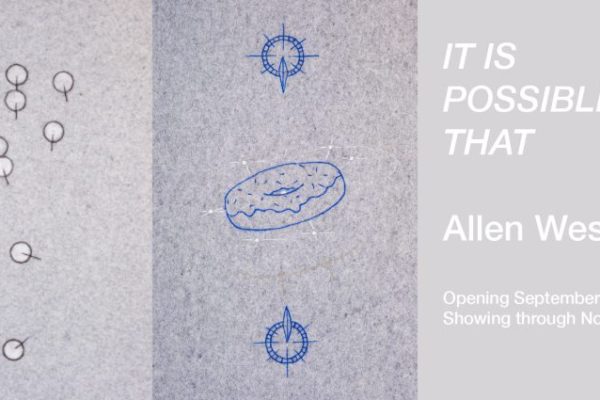 IT IS POSSIBLE THAT

Biddeford–Join Engine for a reception for Philadelphia artist Allen West from 5-8pm on September 29 during the Biddeford+Saco ArtWalk. West’s body of work It Is Possible That includes two-dimensional works made with felt, knitting, stitching, and weaving. The exhibition will be on display until November 4.

Counter to the natural process of the human brain to simplify and categorize, interverity as a mode of knowledge making aims to expand and complicate ideas of truth. The common, linear process of understanding ideas as boolean and eventually one dimensional (spectrum) can be rapidly advanced through a myriad of techniques. In practice this can take the form of abstracting, expanding, exploding, and merging paradigms as well as adding dimensions (up to 3) or additional axes (up to infinity) to existing models. In this way the knowledge building functions of our brain are brought to the surface and examined. Because the brain continues to learn and condense information, the process becomes a never-ending recursion in which all conclusions feed back into the function to be expanded and complicated further.

The textiles allow for an embedding of content within the structure. Felt, one of the oldest types of fabric, is made of hair and creates structure through repeated piercing force, making form from individual elements. Each page diagrams a branching research path that sacrifices legibility for accuracy. Weaving, carrying an ancient history itself, has perceivable order in its grid structure. The tapestries are designed using satin structures and Morris like motifs, but the weaving patterns are overwritten by bird song. In both the image and page are blended structurally, mirroring the way the image plays in the sign/signifier paradigm.

Allen West grew up in New York State. In 2006 moved to Maine to study New Media at the Maine College of Art where he received his BFA. Afterwords he worked as a studio assistant to several artists in Maine and Illinois including Katarina Weslien, Joan Livingstone, and Eduardo Kac. In 2017 he received his MFA in Fiber and Material Studies from the School of the Art Institute of Chicago. Now he works as an artist in Philadelphia, PA. Primarily creating in textile mediums such as felt, knitting, and weaving.

Your ticket for the: ALLEN WEST : OPENING SEPTEMBER 29