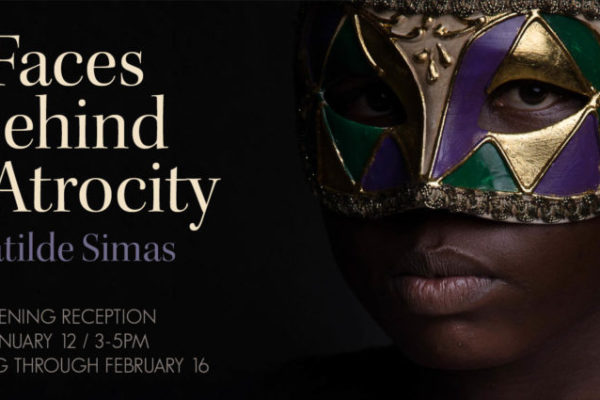 Please join Engine at an opening reception of Faces Behind Atrocity, an exhibition featuring the work of award-winning American documentary photographer Matilde Simas of Boston on Saturday, January 12, 2019 from 3-5pm. January is National Slavery and Human Trafficking Prevention Month and this exhibition intends to raise awareness of trafficking happening here in Maine as well as worldwide. The exhibition will run through February 16, 2019. Gallery hours are Wednesday through Friday 1pm-6pm and Saturdays 11am-2pm.

Human trafficking is globally pervasive, economically motivated, and emotionally overwhelming. Faces Behind Atrocity is a portrait series about child survivors of human trafficking that Simas created for a United Nations World Day Against Trafficking in Persons campaign. A Kenyan based nonprofit, HAART Kenya, granted Matilde access to their organization to document the healing process of these young women. HAART Kenya works exclusively on combating human trafficking in Kenya and empowering its victims. The individuals photographed are girls, ages 13-16 from four different nations who have been rescued from the horrors of the trafficking world and are in the healing process. In collaboration with the survivors, Matilde Simas worked to provide a forum for healing through art. In this portrait series low lighting was used to evoke a mood of deception and secrecy that has been endured. In a pure example of courage, many of these women chose to hide their faces behind a mask to protect their identity. In addition to providing a visual representation of their resilience, beauty, and strength, each woman recorded a written testimony of how they were led into trafficking and the atrocities they faced. Faces Behind Atrocity has received an International Photography Award, Tokyo International Foto Award, and a PRIX de La Photographie Paris Award. Simas says “Despite increasing efforts and a global movement to raise awareness about the atrocities of human trafficking, many people remain unaware that modern-day slavery persists in alarming numbers. As an artist, I want to stir public awareness of human trafficking and modern-day slavery. By engaging the public through art, I can help transform public perceptions; educate individuals, communities, and policymakers; and inspire action to put an end to this horrific crime against humanity.”

This is the second exhibition that Engine Executive Director Tammy Ackerman has slated to honor National Slavery and Human Trafficking Prevention Month. In January of 2018, Engine hosted an educational exhibit of photo collages by Kay Chernush, the director of D.C.-based ArtWorks for Freedom, on the same topic of human trafficking. “It is important to me that Engine strives to show work that not only inspires but teaches and raises awareness. This particular topic is important to me and I’m happy we have a platform to support the work of artists like Simas,” says Ackerman.

Simas is also a founder of Greater Boston-based Capture Humanity, an artist-collaborative involving photographers, filmmakers, and writers from all over the world with the united desire to document humanitarian groups that assist women, children, marginalized communities and conservation efforts. Simas received a BA in Liberal Arts and Science from Suffolk University and is currently studying Social Justice at Harvard University. Her fine art prints are part of numerous private and corporate collections, including the African Union and the Kenyan National Archives at UNODC and UN Migration. To view more of her work please visit MatildeSimas.com

Register for Exhibition: FACES BEHIND ATROCITY

Your ticket for the: FACES BEHIND ATROCITY