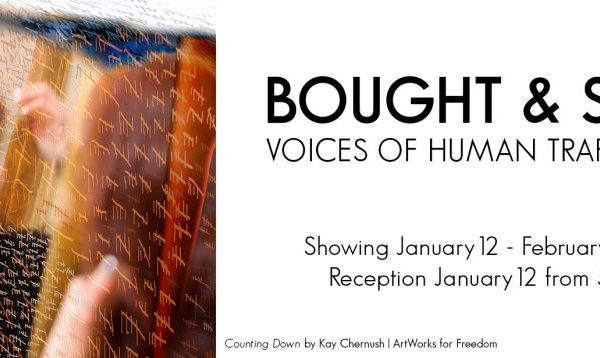 Biddeford–Join Engine and Just a Moment Gallery on Friday, January 12 from 5-7pm for a reception for Bought & Sold: Voices of Human Trafficking featuring works by Kay Chernush, a photographer and the founder of ArtWorks for Freedom, a nonprofit advocacy organization based in Washington, D.C. The exhibition runs from January 12 through February 17, 2018 and will be split between two exhibition spaces, Engine located at 128 Main Street and Just A Moment Gallery at 40 Main Street in the Pepperell Mill Center.

6pm: A short talk will be given by the artist, Kay Chernush, founder of ArtWorks for Freedom, and Louise Merriman, board member of Hope Rising, Maine’s First Residential Treatment Program for survivors of human trafficking, in the Engine gallery space.

The idea for the show is credited to a Biddeford resident, Louise Merriman, a volunteer with Hope Rising, Maine’s first residential treatment program & safe house for survivors of human trafficking. While numbers of trafficked individuals in Maine aren’t as high as other parts of the country, Engine Director Tammy Ackerman was dismayed to learn that many of the local victims are at-risk young girls in high school who are befriended by young men. Ackerman started researching artists who might be creating work around this topic and discovered ArtWorks for Freedom in Washington, D.C. A conversation with Kay Chernush ensued and Chernush offered to send her own work to Engine for display in January, which is National Slavery and Human Trafficking Prevention Month, as proclaimed by President Obama in 2010.

“Art has a storytelling power that can capture the complexities of social issues like human trafficking, It has power to change how we see things  and thus allows us to go deeper in our understanding of why modern slavery takes place and how we can stop it,” says Chernush.

Bought & Sold isn’t Engine’s first exhibition dealing with social issues. The Reflect Project by Trent Bell, in 2013, featured photographs of several Maine State Prison inmates with their letters written to their pre-incarcerated selves superimposed on their portraits. Ackerman says, “This space is not meant simply for the viewing of beautiful art but to stimulate conversations around topics, sometimes difficult topics.”

ENGINE, located in the heart of Biddeford, Maine, is a non-profit arts organization. Engine’s mission is to make arts-driven programming, cultural development, and sustainable creative entrepreneurialism an explicit community value and civic priority in Biddeford. ENGINE is the home to the Maine Fablab makerspace in addition to running at contemporary gallery space at 128 Main street.

KAY CHERNUSH is an award-winning photographer with more than 30 years experience in commercial and fine art photography.  Based in the Washington, DC area, her assignments have taken her all over the world for major magazines, Fortune 500 corporations, and both nonprofit and governmental agencies. Her fine art work includes an exploration of prejudice and empathy, “The Us & The They,” and a series of self-portraits entitled “Self-Examination,” a meditation in words and images of her experience with breast cancer.

Chernush earned a B.A. from Sarah Lawrence College and was the recipient of a Fulbright grant to India. Prior to becoming a professional photographer, she worked for the New Yorker Magazine, the New York Times Paris bureau, the Peace Corps and the US Agency for International Development.  It was while on an assignment for the Peace Corps in West Africa that she fell in love with photography. Self-taught, she considers her career an on-going process of learning how to see.

In 2005 an assignment for the U.S. State Department brought her face to face with the evils of human trafficking and modern slavery. Challenged and appalled by this gross human rights atrocity, Kay began working with individual survivors and anti-trafficking organizations in cities around the world. The innovative approach she developed uses collaged and constructed imagery to dignify trafficked persons and reframe how their stories are portrayed.

Her large-scale abstract images of modern slavery have been exhibited in outdoor and indoor installations throughout the Netherlands, Singapore, Phnom Penh, Mumbai, Jacksonville, Atlanta, Madison, Racine, Beloit, Easton, MD and Washington DC. Her work has also been exhibited at the United Nations in New York and Vienna, the World Bank, and at Michigan State University and New York University.

ARTWORKS FOR FREEDOM was founded by Kay Chernush in July 2011 as a non-profit organization that uses the power of art in the fight against modern day slavery. Through diverse forms of artistic expression and in partnership with artists, human rights and civic organizations and the private sector, ArtWorks for Freedom seeks to build awareness, amplify the voices of survivors, and inspire anti-trafficking activism against this worldwide crime against humanity.

Your ticket for the: BOUGHT & SOLD OPENS JANUARY 12